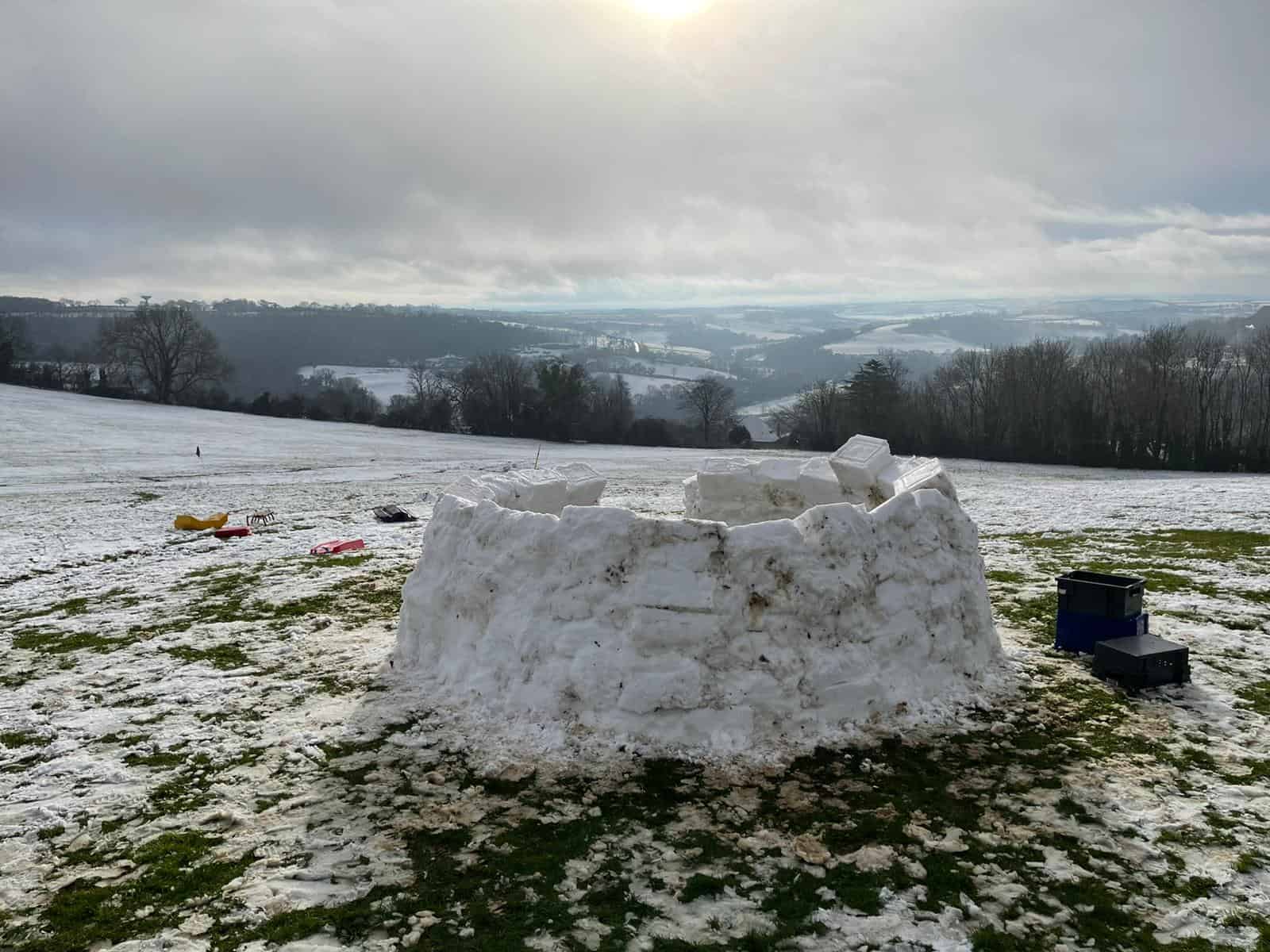 Do you want to build a snowman? No, let’s build an igloo and then sleep in it! Staff and students at Monkton School had this fantastic idea when the snow fell in Bath recently. Cosmo O’Reilly, a teacher and houseparent at Monkton School wanted to ensure that the boarders staying at the school would have fun that Sunday and so set about the igloo construction project with the students from age ten to eighteen.  One youngster had never seen snow before and they all had “a great day in the snow, building a giant igloo with an awesome team of pupils and staff up at Monkton Prep School.”

Keen on adventure and exploration, Cosmo had built an igloo once before when he was at university but not as big as the one crafted with views from the narrow opening extending over the beautiful Monkton Combe valley.

Unleashing his inner Bear Grylls, Mr O’Reilly made the impromptu decision to spend the night in the igloo to raise money for Genesis Trust and to support homeless and vulnerable people in Bath. The build was finished at 9.30pm. As comfortable as he could be with a borrowed basic sleeping bag and mat, he had a good sleep out. Appreciating a hot breakfast in the morning, he also appreciated that one night out doesn’t reflect the true situation for homeless people. Cosmo reflected on the experience.“What must life be really like for people sleeping rough and surviving on the streets?” and he thanked the people who donated to his impromptu Igloo Sleep Out – “Your support will really make a difference to people in our community over this difficult winter.”

We have a wonderful partneship with Monkton School and the Head of Theology, Philosophy & Ethics, Esther Youlten, says, “At Monkton we are so excited about our growing partnership with Genesis Trust. Over the past year our pupils have benefited so much from the opportunities to be involved in a range of excellent talks and workshops as well as fundraising events to support the vital work of Genesis in accompanying the homeless and vulnerable in our community on their journey towards independence.”

We are SNOW grateful for Mr O’Reilly and pupils and staff at Monkton School for seizing the monent and dedicating such a fun but meaningful act of adventure and kindness to Genesis Trust.

If you would still like to support the Igloo Sleep Out  you can do so here – https://buff.ly/3iHvKYC

Any cookies that may not be particularly necessary for the website to function and is used specifically to collect user personal data via analytics, ads, other embedded contents are termed as non-necessary cookies. It is mandatory to procure user consent prior to running these cookies on your website.